The assassination of Wissam Al-Hasan and beyond 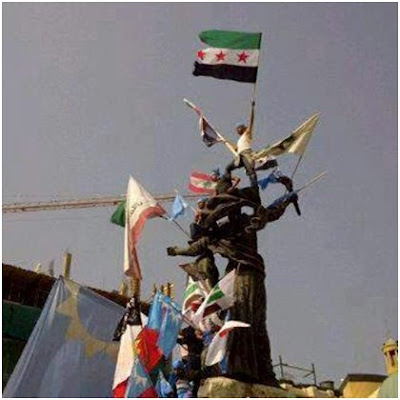 General Wessam Al-Hassan was the general director of the “Information Security” which is considered as a device working in favour for the “14 March movement” that consists mainly of “Future Movement” lead by Al-Hariri, “Lebanese forces” lead by Samir Geagea and “Lebanese Brigades” lead by Amin Al-Jmayel.
I listened to an interview with Rafi Madayan at OTV, a Lebanese TV that represents the National Free Movement lead by General Michel Aon, on Sunday 21 October between 1 p.m and 3 p.m Damascus time (he was the guest in the studio with many live reports interfering the dialogue from time to time, this is why it took 2 hours). I summarized some important notes he explained, as well as some little comments by me.
The speeches of the “14 March movement” that hasn’t stop since the first hour of his death were terrible; they are full of hatred and instigation against Hizbullah! All the anger of his death was directed against Hizbullah! I believe Israel and the Islamist extremists are working in a high harmony! Israel assassinates a personality from one side, and those start to insult Hizbullah! I can imagine the officials of Mossad watching them on Lebanese TVs, smiling and drinking now their Champaign and saying: “Cheers”!
The crowd in the rally is shouting: “Allah Akbar! Allah Akbar!” The flags of Al-Qaeda and FSA show more that the Lebanese one!

Madayan revealed some interesting points:
There was a French idea to finish the Sunni symbols of Syrian “regime” in order to give the impression that this regime is a regime of a “minority” that dominates the Sunni majority. This started by the assassination of the two generals Bikhtiar and Turkmani in the terrorist bombing of the National Security building (as well as killing Asef Shawkat – Alawite - and Daoud Rajha - Christian). Then next target for the French intelligence was General Ali Mamlouk, who is a Sunni from Damascus.
Wissam Al-Hasan was involved with the French in this plan. The case of Michel Smaha was invented to accuse Ali Mamlouk to get rid of him later.
The German file:
W.H. was in a trip in Germany just before his assassination. He was discussing with the German intelligence some secret files. The German files have also to be studied.

Tell the “14 March movement” who are very sure that the assassinator is “Syrian regime” since they heard of the news:
Respect Mossad and CIA a little bit! You are insulting them like that to deny their ability and will to assassinate anybody. You are insulting them to describe them as “innocent sheep”!
Wissam Al-Hasan detected many spying networks for Israel inside Lebanon, so WHY the Israeli hypothesis is absented from the speech of “14 March movement”?!
Tell the “14 March movement” who are crying in our ears day by night with their slogans of “independence and sovereignty”:
How can these slogans match with the plenty of flags of the FSA in their rally in the “Martyrs Sq.” on Sunday 21 October?
Madayan asks them:
Do you think that if FSA wins there will be a secular civil government in Damascus? Or it will be an Islamist one! What will happen if the Islamist extremists that you are now hosting and supporting with money and weapons got strong and have the power (even partially)? Do you think that they will deal with Lebanon in terms of independence and sovereignty? The Islamist organizations are already crossing the borders in their ideologies. For instance: The terrorist organization “Jund Al-Sham” (i.e. Soldiers of Al-Sham) is not restricted in the actual political borders of Syria. Al-Sham is the historical term for the geographical Syria which includes Syria and Lebanon and more). The same for “Al-Qaeda in Al-Sham”! At that time those organizations will not take care of their “independence and sovereignty”.

He asked also:
Is it moral to take advantage of this drama to change the Prime Minister Najib Miqati that they’ve been trying to in the last months? Is it acceptable to use his blood for elective purposes?! They are insisting that the PM has to resign as a natural consequence. He wonders why they didn’t demand the same when the ex-PM Saniora was in power! What will the resignation of the PM serve? Everybody in Lebanon is aware of the fact that reaching an agreement on another government in this situation of tension, even before this accident, is very difficult. How can it be acceptable to use his death to instigate against their counterpart in the country (8 March that consists mainly of Hizbullah, National Free Movement lead by Michel Aon and many others) and accusing them to be the “agents of Syrian regime in Lebanon” and accusing them to be “covering the killers” while they are repeating that he has been martyred for the whole country of Lebanon? Are their slogans and speeches of hatred helping unity?
Then, why nobody in the media of 14 March is caring about the big number of civilian victims of this bomb that killed Wissam Al-Hasan? There are about 100 injuries and 10 victims! The bombing occurred in an area that is almost supporting the National Free Movement. Why the one who wanted to assassinate Wessam Al-Hassan didn’t commit that in an area with less density of population, such as on a road? Why don’t we think of the hypothesis that this could be done by a foreign intelligence, such as CIA or Mossad, that wants mainly to increase the conflict and hatred and instigate the extremist Sunni groups against Hizbullah and ALSO to disturb the background of Michel Aon by giving them the message: “You see, this is the Syrian regime who you are supporting, he doesn’t care of your lives when he wants to kill somebody”
Madayan explained that Al-Hassan was involved in numerous confrontations and files so he has got numerous enemies, so it is naïve to ignore everything and accuse ONE part, that is, the Syrian regime.
Answering a question whether he also put the hypothesis of “Islamist extremists”, Madayan answered:
“Not really, he hasn’t really working against those groups. May be it was mainly the specialization of the army and general security”
At the end, he called all Lebanese people to be aware that nor Sunni people, nor Chiia neither Christians have a benefit of this sedition. This assassination serves, again and again, the sectarian split and the instigation of hatred among Lebanese people.